(Minghui.org) For 16 years, the Chinese Communist Party has deceived people with hate-propaganda against Falun Dafa. Upon learning the facts, many people choose to support Falun Dafa. Their courage to support the innocent in the face of this harsh suppression by the totalitarian regime often brings blessings and miracles. Below is an example that took place in Sichuan Province.

One day I took a taxi to Nanchong City. On the way, I talked with the driver about Falun Dafa and the persecution.

“The CCP always make up lies to fool people,” he said, “When I was a soldier I participated in the Tiananmen Massacre in 1989. Soldiers set some outdated military vehicles on fire and then claimed the students were arsonists.”

As a result of our conversation, he decided to renounce the Chinese Communist Party (CCP) organizations to take a stance against the brutal regime that harms innocent people.

As we continued talking about Falun Dafa, he told me what happened to his wife. Because they only had one car, they took turns driving it for hire as a taxi, one during the daytime and the other at night time, to make a living.

It was his wife’s turn to work the night shift. Three men got into the car but did not tell her the destination. Instead, one of them pointed ahead and said, “Keep going.”

His wife drove for a while and asked, “Where are you going?” The man pointed ahead again and said, “Don’t worry. Just keep going.”

This happened several times until they were out of the city and in a rural area. The men told her to stop the car. One of them took out a knife, pointed it at her and said, “Give me all your money. Now!”

Realizing she was being robbed, the wife reached for her purse. Suddenly, she touched a Falun Dafa truth-clarification card a practitioner had given her. Remembering what the practitioner had said, she murmured, “Falun Dafa is good” “Truthfulness-Compassion-Forebearance is good.” She also asked Mr. Li Hongzhi, the founder of Falun Dafa, for help. 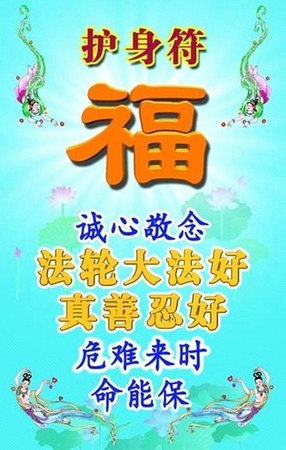 A typical truth-clarification card made by practitioners in China. The words say:“Falun Dafa is good, Truthfulness-Compassion-Forbearance is good. Repeat these words sincerely and your life will be saved when in danger”

Suddenly, the three robbers froze: they did not move or say a word. When the wife told them to get out of the car, they obeyed without a word.

The taxi driver then said, “Because we only have one card, we reached an agreement: Whoever is on duty will carry the card.”

Category: People in China Awaken to the Truth

(Minghui.org) At my age of 67, I am a retired doctor and a police supervisor. Seven years ago, I developed late-stage ovarian cancer and received a complex operation that lasted six-and-a-half hours at a famous hospital in Changsha, Hunan Province on the last day of 2008.When asked about my prognosis by my family members, they were told I had three months to live.

One of my colleagues and friends came by the hospital on January 6, 2009 from out of town to visit me. She had suffered thyroid cancer in 1991, and then she started practicing Falun Gong five years later when her cancer recurred. Although she previously advised me to practice Falun Gong many times, I always rejected her suggestion because the government prohibits it. She brought me the book Zhuan Falun, a DVD of the exercise instructions, and an MP3 player pre-loaded with the exercise music. Moreover, she encouraged me not to lose this last opportunity.

A dying person would grasp at every straw. This time, without any hesitation, I promptly studied the book Zhuan Falun and learned how to do the five sets of exercises. Gradually I felt better and better, and thus I was able to live years and years until today through persisting in practicing Falun Gong.

Because of the persecution, I dared only to practice at home, and I don’t even dare to turn the exercise music up. Neighbors saw that my health became better and better. They were amazed and thought it was a miracle. However, when they asked me how such a miracle could occur, I always explained against my will, “It is because of your loving care and encouragement.”

I did not have the courage to tell them it was the result of my practicing Falun Gong. I was afraid that if I told them I practiced Falun Gong, then my family members’ careers would be negatively affected because they almost all work in police departments, except my grandchildren. My family members also knew that my life was extended because of Falun Gong, but they only allowed me to practice at home and did not allow me to speak about it in public.

I feel great regret because I did not do anything for Falun Gong. Today I cannot keep silent anymore, and I want to share my story with everyone. At the same time, I want to tell everyone: “Falun Gong is good! My Master is a great Master!” Because the former Chinese Communist Party leader, Jiang Zemin, abused his power to start such a severe persecution against Falun Gong, I am deprived of personal freedom to practice in public. I decided to sue Jiang Zemin as other practitioners are doing.

At last I hope more and more people learn the truth, read the book of Zhuan Falun, and benefit from Falun Gong.

August 19, 2015 | By a Minghui correspondent from Tianjin, China

(Minghui.org) Ms. Guo Baohua, who has suffered brutal torture for her belief in Falun Gong, was sentenced to three years in prison by the Chaoyang District Court in Beijing on June 19, 2015. The court did not mail the notification until after the June 23 deadline for appealing the sentence.

Ms. Guo, from the Tanggu District, Tianjin City, had gone to Beijing and posted flyers with information about Falun Gong on December 9, 2014. She was then reported to the Chaoyang Police and arrested. The arrest was approved after the fact, on January 15, 2015.

Ms. Guo was detained in a brainwashing center in 2001 and then transferred to the Banqiao Forced Labor Camp where she was held for two-and-a-half years.

Guards in the forced labor camp tortured her because she refused to read articles that slandered Falun Gong.

She was held in a special wooden box that was called a “black coffin” for more than one month. The box is about 50 cm long, 40 cm wide and about 1.89 meters tall. Many practitioners were disabled from this torture.

She was also held in a dark cell for more than one month. Her arms were stretched to the limit and handcuffed to two heating radiators.

The guards shocked her with electric batons in 2003 and she was held in a wooden box for many days.

The Call of Innocence

The Art of Truth, Compassion Tolerance

Between Heaven and Earth