(Minghui.org) The increasing number of criminal complaints against former Chinese leader Jiang Zemin, which amounts to over 146,000 as of August 13, 2015, has attracted much attention from the public inside China and overseas. In Taiwan alone, nearly 100,000 signatures have been collected since July, which have been sent to both the Supreme Court and Supreme Procuratorate in China to support the lawsuits.

Below are some stories that occurred recently when practitioners in New Taipei City, Taiwan, collected signatures from nearby retail areas and markets. 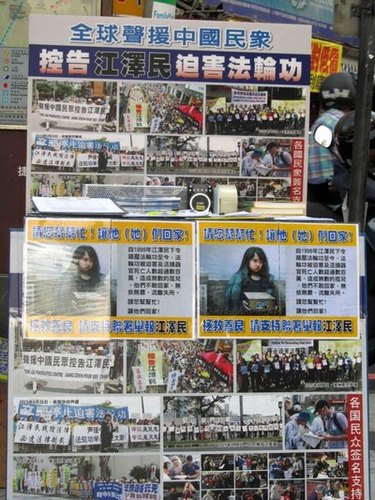 “This Is Important and I Am Very Happy to Help”

When practitioners told passersby about the lawsuits on the evening of August 1, a middle-aged man watched for a while and then asked a practitioner, “I am from Mainland China and I will immigrate here soon.” He signed a petition and asked a practitioner to help him quit the Chinese Communist Party (CCP) organizations, “You are doing the right thing. Please keep it up,” he said.

Two young men in their 20s walked by. A practitioner explained why so many criminal complaints have been filed against Jiang and asked, “Do you want to sign the petition to support it?”

“I want to,” replied Mr. Li from Hunan Province, “but my mother is a Party secretary. If she hears about this, I will be in big trouble.”

“Please do not worry about this. Both your mother and you want a happy, peaceful life. But if one is associated with this regime that harmed tens of millions of innocent people, how could he or she have a safe future?” the practitioner explained.After Mr. Li signed the petition, his friend, Mr. Chen from Taiwan, signed as well and thanked the practitioner, “This is important and I am very happy to help.”

A motorcyclist stopped and learned about the persecution in China

96-Year-Old Woman: “I Am Glad I Lived Long Enough to See This Happening”

As Ms. Tsai, 96, and her family was taking a walk in the market, they stopped and asked practitioners what was going on. “I am from Shanghai and my daughter-in-law is from Anhui. We know what’s going in China,” she signed the petition while chatting with a practitioner.

“I am glad I lived long enough to see this happening ,” the woman said with a big smile.

A young couple signed the petition and continued talking about it as they walked away. “We should tell more people about this,” one said excitedly.

Taiwan Businessman: Helping to Sue Jiang Is Helping Ourselves

After reading the posters and pamphlets in detail, Mr. Wu wanted to sign the petition. But his wife stopped him. “You still have business over there. What if doing this [signing a petition] will get you into trouble?” said Ms. Wu.

Seeing their hesitation, one practitioner explained to them that, by suppressing innocent practitioners and the principles of Truthfulness-Compassion-Forbearance, Jiang has undermined the moral values in Chinese society. “There have been many reports that Taiwan businessmen lost their fortune to the totalitarian regime.When nobody stands up to support the righteous, the society will be in chaos and disasters, like the recent explosion in Tianjin, abound.”

Mr. Wu nodded and turned to his wife, “I think what she [practitioner] said makes sense. Helping this [suing Jiang] is also helping ourselves.” He signed the petition and said, “Jiang will be punished for his crimes. That is for sure.”

(Minghui.org) Many Falun Gong practitioners are now exercising their legal right to sue Jiang Zemin for launching the persecution of Falun Gong and causing them great harm and tremendous suffering during the past 16 years. The number of lawsuits being filed against the former Chinese dictator is on the rise.

The Minghui website receives copies of criminal complaints against Jiang from many practitioners daily. In this report, we present a snapshot of some of the practitioners whose copies of lawsuits were received by Minghui on August 9, 2015.

Ms. Liu Guangfeng, a former employee at the Guangshui City Grain Department, was tortured to death for practicing Falun Gong. Because of the communist regime’s policy of guilt-by-association, her 90-year-old mother and brother lost their home. They are now filing criminal complaints on her behalf.

Ms. Yang Hong, an employee of the Huludao Petrochemical Plant, became disabled due to torture. She has not been released for medical treatment and is still serving her nine-year prison term.

Ms. Liu Yaqin recovered from paralysis after practicing Falun Gong, but she became disabled due of torture and nearly lost her life.

Key Facts: Ms. Liu was sentenced to forced labor in 2001. She was deprived of sleep and subjected to brainwashing. She was crippled as a result of torture and was held in solitary confinement for over a year.

Ms. Liu was sentenced to two years of forced labor in 2004. The guards ordered prisoners to kick her in the abdomen and private areas and pinch her breasts. They also shocked her with two electric batons. Her arms and legs developed egg-sized blisters. She was still forced to do hard labor and was held in solitary confinement and deprived of sleep. She became crippled from long hours of squatting.

Ms. Liu was taken to the Guangshui City No. 1 Detention Center in February 2009. Officers ransacked her home and confiscated computers, several thousand yuan, and two bank cards, including 1,500 yuan of her mother’s pension. She was released two months later, but she could not speak, walk or eat. Her entire body was black and blue. She passed away two days after her release.

Ms. Liu’s brother was held in a mental hospital for seven days for trying to rescue her. He is unable to marry without a certificate verifying that he was not a mental patient.

Her mother’s home in their hometown was destroyed by the authorities. Her woman and her son was allotted a small basement after repeated requests.

Key Facts: Ms. Yang was sent to the Masanjia Forced Labor Camp in October 1999 and forced to do 14 hours of heavy labor every day. She was also held in solitary confinement twice and beaten, which resulted in injuries and bruises all over her body.

She was not allowed to see her husband or her father before they passed away.

Ms. Yang was arrested again and taken to Masanjia in April 2004, where she was barbarically force-fed and tortured. Officers put unknown substances in her food, which caused diarrhea. Ms. Yang was diagnosed with heart disease and weakened kidney function. She was released on a medical parole in June 2004 when she became critically ill and emaciated.

In May 2008, Ms. Yang was sentenced to nine years in Liaoning Women’s Prison, where she was again tortured physically and mentally. Despite being emaciated and injured, she was forced to work for at least 12 hours daily.

In October 2012, she tripped and broke her leg. Confined to a wheelchair, she was still denied medical parole.

Key Facts: Having recovered from an earlier disability and regained the ability to walk after practicing Falun Gong, Ms. Liu traveled to Beijing to appeal for the right to practice Falun Gong in 1999 and 2000 after the persecution began. She was harassed and monitored by the police and had to leave her home to avoid further persecution. However, agents from the 610 Office began harassing her daughter.

Over a month of torture at a detention center left her paralyzed after she was arrested in April 2006. She could not take care of herself and was incontinent. She was held in Wanjia Forced Labor Camp for a year and a half, despite her poor health. She became critically ill.

Her 70-year-old mother passed away a month before her release.

To avoid further persecution, Ms. Liu had to sell her home and has to move often.

In 1999, Jiang Zemin, as head of the Chinese Communist Party, overrode other Politburo standing committee members and launched the violent suppression of Falun Gong.

The persecution has led to the deaths of many Falun Gong practitioners during the past 16 years. More have been tortured for their belief and even killed for their organs. Jiang Zemin is directly responsible for the inception and continuation of the brutal persecution.

Under his personal direction, the Chinese Communist Party established an extralegal security organ, the 610 Office, on June 10, 1999. The organization overrides police forces and the judicial system in carrying out Jiang’s directive regarding Falun Gong: to ruin their reputations, cut off their financial resources, and destroy them physically.

Chinese law allows for citizens to be plaintiffs in criminal cases, and many practitioners are now exercising that right to file criminal complaints against the former dictator.

August 20, 2015 | By a Falun Dafa practitioner in Hulunbeier, China

(Minghui.org) In January 2015, my eldest sister called to tell me that her daughter’s sister-in-law, who lives in Haikou City, was diagnosed with an incurable disease several days after her baby was born.

The new mother was in so much pain that she could not eat, sleep, sit or lie down comfortably. Red patches appeared in several places on her body, and she could not take care of her baby. Other relatives took the baby home.

The whole family was in despair. Not only were they faced with huge medical expenses, but even if she were hospitalized, no one could guarantee that she could be cured.

I was concerned about my niece’s sister-in-law, but all I could think to do was say a few words of comfort.

After I had finished sending forth righteous thoughts late that night, I heard a voice telling me, “Ask her whole family to sincerely recite ‘Falun Dafa is good.’” I was surprised, but quickly realized that it was Master telling me to save them.

I called my niece early the next morning and told her, “Please. Tell your sister-in-law and her entire family to sincerely recite ‘Falun Dafa is good.’ She will be cured. My master has told me to do this. Please have the whole family recite these words earnestly and sincerely. A miracle will occur.”

My eldest sister called me again, and I also told her to recite, “Falun Dafa is good.”

Three days later, my sister called to say, “It worked! She has recovered and the pain is gone. It’s incredible. Falun Dafa is really great!”

Several families from Hulunbeier to Haikou City now praise Falun Dafa, saying, “Master Li (the founder of Falun Dafa) is so compassionate. He has saved a practitioner’s relative who lives far away. Without asking her to spend a dime or take any medicine, Master Li has cured an incurable disease, one that doctors in famous hospitals cannot even cure, no matter how much money you give them.”

My niece’s sister-in-law said with tears in her eyes, “This is miraculous! I will never forget that it was Master Li who has saved my life!”

Category: People in China Awaken to the Truth

The Call of Innocence

The Art of Truth, Compassion Tolerance

Between Heaven and Earth